Vastu Is The Need Of The Day.

“We shape our buildings; thereafter they shape us”.

Vastu enhances and connects us with the source through proper design. Ayurveda, the science of life, is knowledge for health of the body. Vastu creates healthy buildings; this profoundly affects our health, happiness and prosperity and the health of the environment.


Vedic astrology or Jyotish gives knowledge of cosmic influences on our lives, emotions, relationships, prosperity, career, and health. Applying an expert recommendations by a consultant helps correct negative influences in all areas of life. It also increases and creates positive effects and beyond.


This science is complete in itself. Happiness to the whole world it can bring all the four benefits it bestows on you rightful living, money, fulfillment of desires and bliss are all available in this world itself. 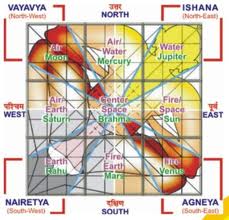 Vastu is the ancient Indian science of architecture man-made structures. A part of the Vedas, the word 'Vastu' in Sanskrit means 'earth', and in the modern context, Vastu covers all types of constructions. Vastu pertains to the physical, psychological and spiritual order of the built environment, in consonance with the cosmic energies.

It is a study of planetary influences on buildings and the people who live in them, and aims at providing guidelines for proper construction. Hindus believe that for peace, happiness, health and wealth one should abide by the guidelines of Vaastu while building a dwelling. It tells us how to avoid diseases, depression and disasters by living in structures, which allow the presence of a positive cosmic field.

The layout of your residence or work place is very similar to a Horoscope. In astrology one cannot tame the baneful planets whereas in Vastu, the Earth being one of the nine planets is the best approach to configure to our needs and get the best results and get beneficial results from such bad effects of the planets.

Since Vedic wisdom is considered to be synonymous with divine knowledge of the cosmic mind obtained by sages in deep states of meditation, Vaastu Shastra or the science of Vastu is thought to contain the guidelines given by the Supreme Being.

The principles of Vastu had been explained in ancient Hindu scriptures. Fundamental premise of Vastu rests on the assumption that the earth is a living organism, out of which other living creatures and organic forms emerge, and so every particle on earth and space possesses 'live energy'.

According to Vaastu Shastra the five elements - Earth, Fire, Water, Air or atmosphere and Sky or space - governs the principles of creation. These forces act for or against each other to create harmony and disharmony. It also says that everything on earth - in some form or other - is influenced by the nine planets, and each of these planets guards a direction. So our dwellings are under the influence of the five elements and the nine planets.

Vastu shastra says that if the structure of your house is so designed that the positive forces over ride the negative forces then there is a beneficial release of bio-energy, which helps you and your family members to live a happy and healthy life.

A positive cosmic field prevails in a Vastulogically constructed house, where the atmosphere is congenial for a smooth and happy life. Contrary to this, if the same structure is built in a manner that the negative forces override the positive, the overbearing negative field makes your actions, efforts and thoughts negative. Herein comes the benefits of Vastu, which guides you to have a positive atmosphere at home.


Evidently, Vastu is akin to the science of geopathy, the study of the diseases of the earth. In both these two disciplines, for instance, the presence of dampness, dressed stones, beehives and anthills are considered harmful for human habitation.

Geopathy recognizes that electromagnetic radiations that are cosmic in origin surrounds the globe, and that radiation distortions can make a site unsafe for construction. Geopathic stress may also attack the immune system and cause health related problems.

There are also a lot of similarities between Vaastu and its Chinese counterpart Feng Shui, in that they recognize the existence of positive and negative forces (Yin and Yang) except for the fact that the latter attaches too much importance to gadgets, like fish tanks, flutes, mirrors and lanterns. In Feng Shui the nine year cycle causes a problem by shifting to a different place which is not practicle, hence Vaastu is gaining rapid popularity in India and abroad.


Does Vaastu make any sense?

While many people still strongly believe in Vastu, the common consense is that it is an ancient science, which was useful in conditions prevailing in ancient times.

Vastu is like holistic medicine, focuses on addressing underlying issues for the health of the entire system - the people as well as the physical structures and property on which they live.

The science of vastu is a meaningful dialogue between mind and nature, enabling us to better understand the energy fields of various objects around us as well as those of invisible cosmic bodies that affect our minds and bodies, influencing our lives directly and indirectly. This science touches every aspect of human life.

As long as man's planets are good, the evil effects of Vastu Dhosh remains suppressed, but when his planetary direction starts getting weaker, then he is surrounded by many miseries, sufferings, stress and diseases while living in a Vastu uncompliant house. On the contrary, if a man lives in a building built according to Vastu Shastra, his life goes smoothly, even if his planets are weak.

Nowadays, Vastu is the ancient science of Vedic Science to be sweeping across the Western World due to the benefits people derive from this Science of Movement and Placement.

Hence, rediscovered again the Modern Science of Vastu came into practice in residence and industries.


Why go for Vastu Shastra ?

Money is an integral part of our lives but in this fast life - Tension, depression and stress, which have become a part of our daily life can be reduced with financial stability. So, to attract wealth, peace make your home and work place vastu compliant.

With the economy pumping so much uncertainty and anxiety into the environment, it's important to do all you can to create a supportive and protective environment by implementing Vastu .

Authentic Vastu balances both visible and invisible energies. This is a critical difference from a lay-man and an expert.

If you can't immediately tap the expertise of a professional Vastu Consultant, better go for a few books on vastu and join some good forums for  discussions with the experts.

This science of Vastu is complete in itself. In this fast moving life, happiness to the whole world can bring all the four benefits it bestows on you rightful living, money, fulfillment of desires and bliss are all available in this world itself.

Why go for Vastu survey before purchasing a flat or an apartment ??

Vastu Dosh means defects of a paranormal nature present in a dwelling place, house, commercial building or any other type of construction that leads to a violation of the basics of Vastu Directions that bars the positive energy flow thereby resulting in chaos in the lives of the inhabitants.
.

A defective construction is said to attract energies which are of a negative, harmful, destructive or depressive nature. This is sought to be rectified through the science of Vastu Shastra though no mention of rectifications are mentioned in the Shastras. There are other paranormal remedies available like Pujas, Havans and the chanting of Mantras but the effect may not of permanent in nature.

Remedy for flats is not usually possible. It would take detailed examination and extensive remodeling. It is very difficult to apply Vastu principle to an existing flat. You can't treat it as an individual only, you need to consider the whole building configuration also. You must verify the building orientation, not just roughly figure that it faces east or some such direction.

Analysis of your flat requires expert and careful consultation. In general, the facing of a door can be any direction of the cardinal points, but, it must be properly located. Just to have an east facing door does not solve the problem. It must be auspiciously located. Master bedroom in south west is good, but it must be located within the whole context of the group of flats also. The same goes for all the room locations.

These type of modern buildings create a situation where there is no vibrational separation between families. There is so much to consider, it takes a professional review, with examination of floor plan, orientation and dimensions.

Vastu Shastra evolved during the Vedic times in India. The concept of VAstu Shastra was transferred to Tibet, South East Asia and finally to China and Japan, where it provided the base for the developement of what is known as Feng Shui.

According to a report of WHO that appeared in the New York Times in 1984, the scientists of USA have declared a considerable number of buildings as sick. The sickness is attributed to the disorderly arrangement of space within the built environment. Such buildings are found to be the source of mental and physical disorders. #Sick Building Syndrome

In the modern context Vaastu covers all types of constructions irrespective to religion and regional boundations. Vaastu pertains to the physical, psychological and spiritual order of the built environment, in consonance with the cosmic energies. It is a study of planetary influences on buildings and the people who live in them, and aims at providing guidelines for proper construction.

Hindus believe that for peace, happiness, health and wealth one should abide by the guidelines of Vastu Shastra while building a dwelling. It tells us how to avoid diseases, depression and disasters by living in structures, which allow the presence of a positive cosmic field.

Some of our valued clients:


Do click to read the 'Power of Vastu' in Power play:

City residents of Ludhiana turns to ancient wisdom of vastu. Are You? TOI Read More


ARCHITECTS HAVE BEEN talking for years about “BIOPHILIC” design, “evidence based” design, design informed by the work of psychologists.
Recently, the near 10-year-old Academy of Neuroscience for Architecture believes that neuroscience could make science’s greatest contribution to the field of architecture since physics informed fundamental structural methods, acoustic designs, and lighting calculations in the late 19th century. The academy held its national conference at the Salk Institute, in La Jolla, California.


Could neuroscientists be the next great architects?

A must for all Architects and Interior

We’d love to assist you with any of your vastu applications.
Please call for an appointment, or for an enquiry, email, linkedin, tweet  whatever works best for you!

We will respond as soon as possible when on desk.

"NOTHING" in the Universe, not even the most insignificant things happens by accident. The science of Vaastu is an eternal bridge between the magnificient and the mysterious world & is capable of diverting one’s destinity towards a peaceful and prosperous life

Disclaimer : Subbir Kumar Datta hereby, excludes any warranty, express or implied about the accuracy or quality regarding any of the projected contents, calculations, suggestions, advises etc. Vastu Shastra cannot be directly linked with prosperity etc. It only suggests ways in which one can live in tune with the laws of nature, so that you can be healthy and peaceful and work efficiently. We hereby declare that no one is authorised to impart any type of schools nor collect and execute Vastu corrections on our behalf unless and untll otherwise intimated in writing. Litigation if any subject to Kanpur Jurisdiction.

Remember ! Ignorance of Vastu is not an Excuse.